The underestimated importance of aneurysm softness

According to the World Health Organization, cardiovascular diseases, such as heart attacks and strokes, are the number 1 killer in the world with nearly 18 million deaths each year. Aneurysms, outward bulges of blood vessel walls, are less known examples of cardiovascular diseases. Still, nearly 50,000 people annually suffer from ruptured aneurysms in Europe alone, and more than half of these people die.

Aneurysms are often discovered during routine medical checks. The doctors then have to make the difficult decision whether surgery is beneficial or not. Especially for brain aneurysms, each surgery comes with its own risks, which may be larger than the risks of aneurysm rupture during the patient’s natural lifetime. It is therefore desirable to estimate the chance of rupture of each discovered aneurysm as precisely as possible. However, since each patient and each aneurysm is different and risk factors for aneurysm rupture are not well known, the criteria for surgery are relatively unspecific and not very reliable.

There is worldwide effort to better understand the biology and mechanics leading to aneurysm formation and rupture. Since blood-flow-induced mechanical stresses change the properties of an aneurysm over time and can eventually lead to rupture, aneurysm deformability is a key factor to consider. Yet, the deformability of aneurysms is ignored in the majority of research works due to related challenged in computational modelling and high-resolution imaging.

In our recent paper in PLoS ONE, we simulated blood flow in a deformable brain aneurysm to better understand how the pulsatile blood flow and the aneurysm deformation interact (see figure below). We found that the blood flow and mechanical stresses inside the aneurysm are affected by at least two different mechanisms: size and deformability of the aneurysm. In soft aneurysms the blood flow mechanics can strongly deviate from what has been known for rigid aneurysms. Our simulations revealed that, in the case of damaged blood vessel tissues, which are prone to large deformation, the blood flow velocity in the aneurysm is not a good indicator for the mechanical stresses. This is an important finding since usually the stresses are estimated from the flow velocity.

There is, thus, urgent need for numerical methods which allow a direct estimate of the stresses acting on aneurysm walls, the resulting deformation and possible rupture. Suitable candidates for such models can be constructed by combining continuum fluid dynamics solvers with mechanical models for tissue degradation, deformation and rupture.

Such computer models could improve the risk analysis and decision making for individual patients and thus help to save thousands of lives each year. 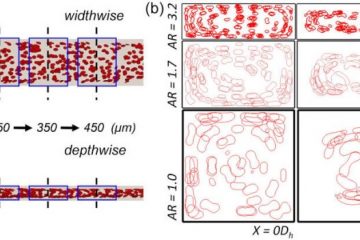 What was the first time that you have seen your own blood? Chances are that you bumped into a table as a child, or a physician took a blood sample from your arm when you were sick. Anomalies in blood flow are associated with many prevailing diseases, such as heart attack, stroke and malaria. These diseases threaten millions of lives globally each year.