What was the first time that you have seen your own blood? Chances are that you bumped into a table as a child, or a physician took a blood sample from your arm when you were sick. Anomalies in blood flow are associated with many prevailing diseases, such as heart attack, stroke and malaria. These diseases threaten millions of lives globally each year.

Red blood cells (RBCs) are the most common cells in blood and occupy 40%–50% of its volume. RBCs are responsible for transporting oxygen to all organs and tissues across the human body. This is not a trivial task at all. During each cycle of circulation, RBCs need to travel through complex networks of blood vessels, some of which are even narrower than the RBCs themselves.

To accomplish their grand venture throughout the human body, RBCs need to be deformable and they need to share the available space in the blood vessels with all other cells. Some diseases can cause a change in RBC deformability and the way that RBCs are arranged while they travel from one vessel to another. Uncovering these mechanisms, especially in the smallest blood vessels that have diameters less than one tenth of that of a hair, is crucial for a better understanding of blood flow in health and disease. This understanding can potentially lead to better ways of diagnosing and treating blood-borne diseases. However, the direct observation of RBCs flowing in the blood vessel of humans or animals is expensive and technically difficult.

Thanks to the advance of microfluidics technology in the past two decades, the dynamics of RBCs can now be imitated by experiments in miniaturised devices composed of tiny channels with bespoke geometries and well-controlled flow conditions. Nevertheless, many simplifications are still required for these experiments. For example, artificial microchannels often have a rectangular cross-section, rather than the nearly circular cross-section of real blood vessels. Furthermore, experiments often use diluted blood since RBCs are difficult to distinguish when flowing at the naturally high concentration of blood. These practices impose potential uncertainties and may lead to erroneous understanding of experimental results if not carefully inspected.

In our recent paper published in the Biophysical Journal, we reported an unexpected arrangement of RBCs when flowing through a rectangular channel. Usually, RBCs move towards the centreline of a channel, owing to their softness and tendency to be pushed away from the walls by the fluid. However, our experimental colleagues at the University of Strathclyde in Glasgow observed that, under conditions which are often used for microfluidic experiments, RBCs can form a different spatial arrangement where they accumulate in a ring-like structure around the centreline. We confirmed these findings with large-scale simulations on the UK’s national supercomputer, ARCHER. Thanks to the exhaustive data generated by these simulations, we could understand and explain the unexpected RBC arrangement.

We found that the channel length required for RBCs to reach the channel centreline becomes much longer than that commonly presumed in experiments if diluted, rather than whole blood is used. Therefore, the often made assumption that RBCs are distributed close to the channel centreline may not be valid in many experiments routinely performed around the world. Experimentalists should therefore be aware of our findings to avoid possibly wrong interpretation of their data, or better still, to improve the design of their microfluidic devices.

Our work teaches us the lesson that some scientific assumptions require an occasional revision, even if they are made regularly by a large number of researchers. It seems that blood flow, although being studied extensively for nearly two centuries, still has many surprises to offer. 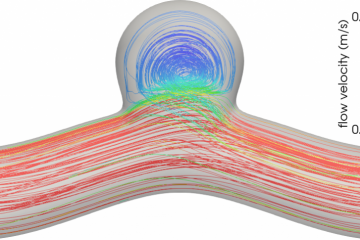 The underestimated importance of aneurysm softness

According to the World Health Organization, cardiovascular diseases, such as heart attacks and strokes, are the number 1 killer in the world with nearly 18 million deaths each year. Aneurysms, outward bulges of blood vessel walls, are less known examples of cardiovascular diseases. Still, nearly 50,000 people annually suffer from ruptured aneurysms in Europe alone, and more than half of these people die.